Yup, it's been a long time since I last posted here.  A lifetime ago, really.  So...  I have started another blog.  It is not heavy with bellybutton gazing or other philosophical meanderings...  It is about me...  A Crazy Old Programmer.  :-)

Really, it is technical and computer oriented with some rants thrown in for good measure.

Yes, I am doing well, living the life of a programming telecommuter.  Browse on over if you are so inclined.

Where Are My Google Ads?

Yes indeed, it has been a while since I have been here.  Live has been busy with my fiance and family and work.  My blog here has been gathering a bit of dust, and well, that was to be expected to a certain extent.

However, I came here this morning to read and think about some new posts floating around in my brain, and what do I see?  Or rather, what do I NOT see?  The Google ads and widgets that were on my blog.  What happened to them?

There is no e-mail stating they would be removed...  No notification, nothing.

Yes, their Terms of Service (Google & Blogger) state they have a right to do this without notification, but it is still irritating.  Maybe it is time I migrate this somewhere else.

Seems odd that this would happen, not long before having Google earnings very close to that magic $100 mark where they actually cut me a check.  We shall see...

-- UPDATE
It would seem to be some sort of computer/browser issue.  ODD!!!  two computers show the ads and gadgets but my main computer doesn't show them at all.  So...  False alarm, likely.  Maybe my main computer just needs to be rebooted or...  who knows.

About Time for a Little Update

It has indeed been a while since I poked my head in here.  Damn...  rather quiet for the light being left on.

Well, the life of Razor has been fun, enjoyable and above all else, interesting.  In my mind, 'interesting' is almost always good.  Since my last post...  There has been
a cross country road trip to Illinois to visit my Mom and daughter; a relocation from my rather misanthropic, second floor apartment; an IRS audit; a new rear tire for Athena;  the final payoff and receipt of title for Athena (YEA!); a dropped Honda CB900F causing a lot of smoking, broken turning signal and cracked stator cover (BLEK!); a pulled tooth; started smoking again and then stopped again; sold my Project Vixen, an old Suzuki VX800 that was basically a 'basket case'; started playing my guitar again; got a few new tats; started really thinking about my diet & exercise - and changing behavior accordingly.

A few rides with a passenger.  Yes, Razor is now taken!  Off the shelf!  Out of circulation!  No longer riding one-up! 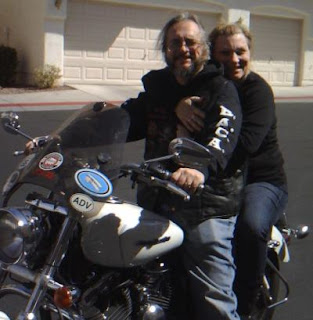 Yes, she loves riding & wants to ride her own... 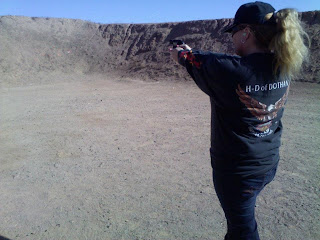 She knows how to handle a firearm! 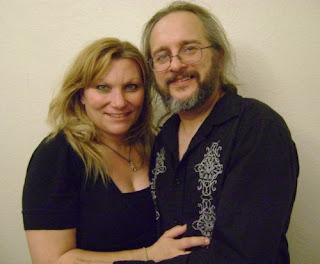 We do look pretty damned good together... 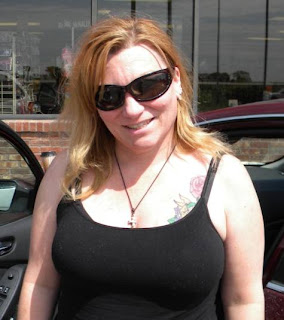 And, not once in nearly 3500 miles did she even threaten to toss my ass out of the car because of my stupid jokes.

Have you ever been riding a lonesome twisty road when just ahead, at the apex of a turn there appears a slight patch of gravel? No time to slow, no way to avoid the inevitable potential of going down. Adrenalin surges and with everything you have, legs grip the bike, hands press against the bars and a slight smile forms in one corner of your mind.
There it is.
Rear tire hits rubble, centrifugal force pulls the rear of the bike out and away from balance. Body reacts, adjusts to stabilize. So much less than a moment later, rubber re-engages asphalt, grabbing for a safe hold and finds it. Suspension compresses with new found safety of traction. Bike wobbles for a moment as the human-machine regains stability, finding a new trajectory.
Sweat drips from under your helmet, down your face and that internal smile is expressed and a verbal "YEE HAW!"
Not that a rider seeks out these gravel patches in life or desires to experience the terror of hitting them, but the exhilaration of a conquered danger and the chance of a new path is simply sublime.
Posted by RazorsEdge2112 at 7:43 AM 7 comments:

Hold fast your sword and tight your shield against the oncoming night. They are battle worn and show the scars of skirmishes won and lost but in your hands are peerless, flawless and shall lead you and all you love through safely until the blessings of dawn grace the universe. Demons and vermin cower at the glint of moonlight on your blade. Tempests rage against your armor yet you hold strong. When the singing of heaven-borne birds herald the oncoming morn I pray you find repose beside the blue-green crystal waterfall, for there I shall be and you may rest your weary head on my shoulder and weep and rest.

As a proper preface, while going through a few of my boxes I discovered some backup CDs from days gone by. There was a phase where I dabbled in something called flash fiction and other forms of short story telling. Here is one that had been hiding a while.
Just so you know, gentle reader, this story has nothing to do with my own Dad. I just needed a character to convey an antagonistic current, and well, this is how it turned out.
"Underqualified" (C) 2011, by me.
---------------

“Underqualified! Again,” his father would say over and over. It was his mantra of self loathing.

“Jamie, I hope one day you ain’t underqualified,” he would say, old computer in front of his glazed eyes, bottle of whiskey in one hand, cigarette in the other.

“But Dad,” his son pleaded with a hint of desperate, youthful helpfulness. “Why don’t you just go to school and learn something. Get good and then you can get a job. I know you can. Just try, ok?”

He lay his head on the table in perpetual desperation. “I can’t, Jamie. I’m too old. Companies want the young workers, not old bastards like me.”

It was the same, night after night. Searching the Internet and newspapers for jobs, half bottle of whiskey and pack of cigarettes consumed in solitude before collapsing on the tattered couch or fourth hand easy chair. At the age of twelve Jamie just stopped trying. He was unqualified to help his father. Those that could help were ”stupid,” or “didn’t know shit,” or “didn’t know how hard his life was.”

Through the tears, he smiled. Standing at his Dad’s diminutive, newly cut gravestone, head bowed, he prayerfully whispered, “I love you Dad. Fuck you and your goddamn underqualifications.”

Turning, he wiped the tears from his face and waved to his girlfriend waiting with their bikes by the gravel road. Putting on his helmet and gloves he thought, ‘Fuck your underqualifications. Life is waiting for me to grab it.’ 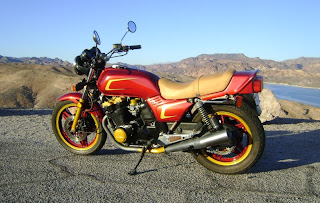 She is an ancestor of the entire current Honda sport bike line. They were only sold in the states in 1981 and 1982 but marketed in other places from 1979 to 1983. That was the first generation; there was a second generation in the mid to late 2000's that was also known as the Hornet in Europe and the Honda 919 in the states.
Onward...
1981 Honda CB900F -vs- 2004 Harley XL1200C
The ride is a LOT different. With my Sportster, almost every bump and rock in the road causes a minor tremor. With the CB, the suspension just absorbs the energy. It can still be felt, but the feeling of being slugged in the backside with a 2x4 isn't there.
While I am not necessarily one to ride fast around corners, the CB does make it fun. Where the Sporty would dive into corners, needing pressure to keep her from laying over all the way, the CB just glides into them while maintaining wonderful balance. AND, in tight corners I could feel the Sporty's rear tire slide ever so slightly. Quite disconcerting. And it isn't the tire. Several rear tires have been on my bike with the same feel.
There is no sliding sensation on the CB. It's as if there were steel claws on the tires. She takes hold and doesn't let go. Heck, I was doing the motorcycle range at the local college parking lot and was able to do the figure-eight at 15 to 20 MPH. THAT was fun.
Honda didn't design the CB series to be fast from the starting line but get that engine to 4500 RPM and she could eat my Sportster for breakfast. Yes, the torque from the Sportster's V-Twin makes for fast starts, but after about 40 MPH, the CB could leave her in the dust.
Balance... wow what a difference. My Sporty is pretty stable, but the CB can creep along at 5 MPH all day without a problem.
And speed... I have pegged the Sporty and it is a scary thing to feel. The CB speedo only goes to 85 MPH and the engine cranks at about 6200 RPM for that. Her red line is about 9000 RPM. Plenty more speed than the max on the speedometer. And, hunkering down close to the tank gives a nice stable, safe feeling ride.
Mileage...
Here is where the Sporty beats the CB. Hard or moderate riding both yield a mileage of about 55-65 MPG on the Sporty. On my CB, it is 40 - 45MPH. Not so good.
Looks...
Yes, this is subjective, but going to throw it out. My Sportster has been mistaken for several different Harleys. There have been compliments here and there. However... I have only owned my CB for one week and people will just be walking by, stop, look and start up a conversation. Yesterday a neighbor stopped on his way to work and bet me he could tell me what bike it was. He lost. While the paint job doesn't agree with the sensibilities of some, the looks are classic.
Ride...
No more numb ass!!!!! Riding the Sportster was akin to motorized flogging on trips over 200 miles. Today I put about 175 miles on my CB with no uncomfortableness at all!
So... Please don't disown me... and please don't tell my Sportster (although I think she already knows), my old little grandpa of a Superbike is without a doubt my riding favorite.
If you see me on the road, and who could miss a bike painted like this, just give me a wave. See ya all out there! 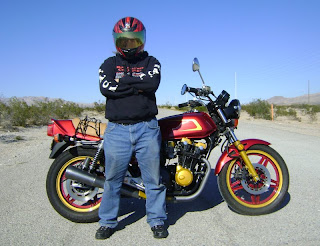