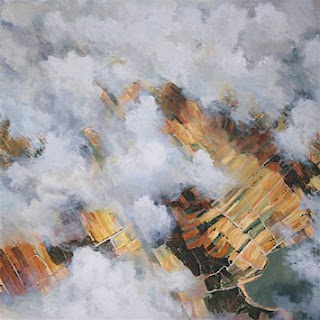 Are they simply juxtapositions of two or more things or events that show a commonality? If event A never occurred, would event B be noticed? Does A cause B? B cause A? Is there some unseen string tying the two together, only to be observed by a single person?

If I dream of a black Harley Street Glide with a four leaf clover painted on its tank, and then see that same bike on the commute home from work, that would seem odd, yes? Perhaps viewing the bike would shape the memory of the dream so as to engineer a false commonality. Maybe it was really a Triumph Bonneville with a fig leaf on it's tank riding around in my dream. Memories, especially of dreams, are fluid and fleeting, many times coming into false focus based on similar physical stimuli.

Any more, I will be damned if I know how some of these unseen things in the universe work.

This morning I wrote a little piece about Hearing a Call. The Call is unique and can mean different things to different people. Some calls are internal; some exhibit external presentations. Mine is a private call at the moment. No, I am not giving up motorcycling. No, I am not "switching teams." An, no, I am not entering the priesthood. When the time is right; timing is everything... or nothing at all.

At any rate, this morning I wrote what I wrote. This evening after leaving work, on my way to run a lengthy errand, an advertising truck caught me eye. If you are not familiar with these vehicles of questionable quantitative value, they are typically flat-bed trucks with large signs mounted to the bed. Some of them have signs that change. Others' signs are static.

This particular one was static. It was in oncoming traffic, waiting to turn left, across my path of travel. Needless to say, vehicles in this position throw imaginary red flags while I am riding. As I pass, the sign was obvious. The ware or service being advertised was unimportant. The huge words in yellow on blue, once read, would have caused my chin to drop if not for my helmet's strap.

"Something is calling, Answer It!"

This stuff is just too odd for fiction. 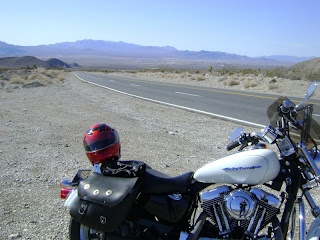 Omnipresent as the universe is the call. Persistant and ubiquitous as water tumbling gently in ageless streams, it is there for those to hear.

As children, all are capable of hearing the gentle bell heralding the call. Over time deafness is beaten in by others or by ourselves. We are all capable of hearing again, however not knowing what to listen for, or when the call will come, makes this task of hearing no less difficult.

Some fear it. Some factor it away in cold logical equations such that the remainder is considered rounding error. Some feel it is not within them to answer. Some are told it is better not to answer. Some apathetic souls simply sit and watch television as the bell patiently asks for attention.

Socialy Inept & A Choice of Good -vs- Good

I ride a motorcycle. To me its physics are simple; throttle and brake and gyroscopic effect and fuel and road condition and speed and weight. When I can afford it, I fly. Here, the physics are pretty simple as well; thrust and drag and gravity and lift.

This is my public announcement to the world... I am socially inept. Nuances that others see and understand, fly tall red banners for all to see, yet for me they are nothing but tattered rags ruffling in the breeze. They serve no purpose but to place tiny markers in my mind, and I move on.

Decisions... Here is something I posted on my Facebook status: "What path doth one take when both are of the righteous and just?"

Please tell me. My choice was made before the situation, with it's logic that I could not argue. It was there, the irrefutable logic presented as flags; nuances that hold no comprehension in my mind. It required an interpreter.

Perhaps I will get my ass kicked for not seeing the nuances. In the proverbial sense, it has happened before.
Posted by RazorsEdge2112 at 9:38 PM No comments:

As fate or luck or the universe would have it, Valentine's Day this year is a solitary 24 hours in a calendar of 8,760 hours. Nothing new. There are less attractive alternatives to a solitary Valentine's Day. So, this day when so many celebrate being with someone special, I do as well.

What did I do? Ride, of course! Originally the plan was to spend the day in my garage, working on my project bike. By 10AM, the weather was in the low 60s and the bright blue sky perfect for riding. 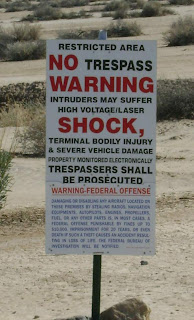 This No Trespassing sign was a little unsettling. A Laser Shock??? 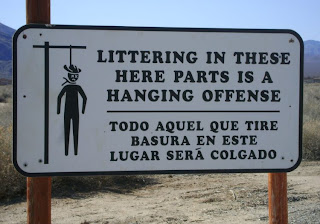 This one made me giggle a bit. 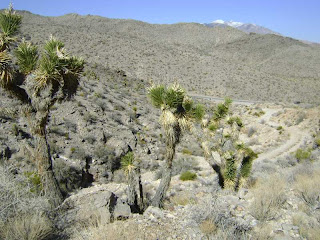 This is the time of year when the desert starts to turn green. Couldn't resist taking a few pictures while doing a bit of hiking. 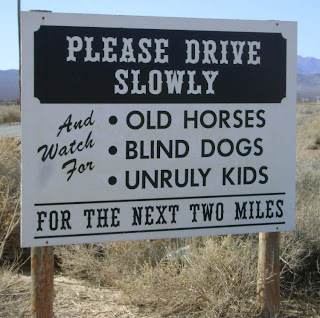 ROTFLMAO!!! These ranchers certainly have a sense of humor! 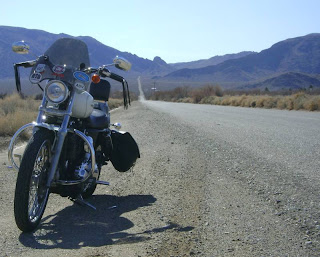 The long lonely road. How apropos.
And finally, a little video of the ride. Hope it doesn't bore all who decide to watch. :-P
Posted by RazorsEdge2112 at 10:26 PM 1 comment:

Six months ago, my daughter, her boyfriend and I moved into an apartment. Since the cost of moving and getting the appropriate things set up was coming out of my bank account, a bold decision was made.

No cable TV. No digital converter, either. If my daughter or her boyfriend wanted it, they could pay for it. And, I am here to say, people CAN survive without it.

Since being deprived of this mind-sucker, my daughter has acquired a job and loves it. Sure, it's Burger King, but complaints are minimal. Her grades went up an entire letter grade in ALL classes. YES! And, she now has a pet snake that SHE paid for and SHE takes care of.

Her attitude toward life and money and responsibility has entirely changed for the better.

Her boyfriend has acquired a job he likes and is doing well.

And what of I? Well, my project motorcycle is slowly moving along; I have finished four fiction books; started reading and researching the history of the county where I grew up (Mercer County, IL); taking classes in preparation of helping at a local domestic violence center; have a few websites that are in the process of being built; taught my daughter's boyfriend how to change the oil in his car; ridden across the country; started to write a few short stories; started creating videos of my rides and while I work on my VX800; and a few things that are certainly forgotten.

So, my suggestion, if at all possible, leave that television off. Or if you like, dispose of it like the person in the above video.

If I could only get my two room mates do clean the apartment and do the dishes...
Posted by RazorsEdge2112 at 12:44 PM 3 comments:

Over the past week, statistics have been raining down on my head. While I do not purport to be an expert in the field of statistics, I do know enough to be dangerous; where and what to question.

Keep in mind that the source of this data is not strictly from child abuse professionals. This provides a wider and deeper investigation into this social ill. However, including data from individuals provides a bit of variability in the reported data. Some of this variability was filtered through a more or less standardized reporting criteria, but that latitude of variability still exists.

One of the first things taught in statistics class is to ensure a random, representative sample. Anecdotal evidence as relayed to your's truly, indicate a sharp but brief rise in reports immediately after Christmas and New Years. Neither of these peaks are included in the sample periods.

Further, using the 2008 Quarterly Domestic Violence Report from the Nevada Department of Public Safety, the peak months of reported DV is April, May, June, July, August and September. National monthly or quarterly statistics were not readily available, so, this will need to suffice.

Further, other government studies show different numbers. According to the CDC, there were 905,000 childhood victims of maltreatment from October, 2005 through September, 2006 as reported by state and local child protective services. According to the Health and Human Services report, a total estimated of 1,256,600 occurred. This latter number included an estimation of official and unofficial reports. So, if there were 905,000 official reports, unofficial reports would constitute 351,600. Sort of low, in my opinion.

To make things just a little stranger, the US Census Bureau reported there was a total of 1,860,259 reports of child abuse and neglect that were investigated in 2007. This number blows the Health and Human Services report out of the water.

Either way, if that number is greater than one, it is too many.
Posted by RazorsEdge2112 at 4:02 PM 1 comment:

It can be so easy to slip back into our own caves. The warmth and gentle humid breeze welcomes one back with dark open arms. The world, so confusing and different and startlingly sharp prod the weak back home to the well worn lonely stone prison.

And many are happy to go.

With others, apathy and weakness alters the escape velocity ever so subtly. Over time many find their trajectories aimed back to where they started with such force it may seem impossible to halt the slide. And they impact, and feel the warm safety of their old cave, and stay.

The boulder at its mouth placed there for the previous resident's protection. This infinite grotto sobs and cries out for the person's return. In the heavy air an unearthly scream peels out to the universe, vibrating in resonance.

Standing there unwavering, armor stained and dented from battles won and lost. Brown, tarnished shield held firm in a black leather gauntlet clad scarred hand. Spear, mirror polished, razor sharp with the marks of many battles, ready as its master, without a moment's pause.

This cave shall never be inhabited again.
Posted by RazorsEdge2112 at 6:57 PM No comments: