This is a day I will not soon forget. The riding was simple but the first several hours were fraught with concerns over my engine. This was the day I should have, according to the folks at the Honda Warranty Department, sought a Honda dealership for advice. I didn't. The symptom was minor but the ailment was major. That is why my bike is, as of this moment, sitting in my back yard waiting for me to have a few solid days to work on her.

This is not a happy issue, and one that I will not delve into much more in this log. Suffice it to say that when this problem first exhibited its symptoms, the bike was under warranty. When I discovered the true nature of the illness, stripped threads in the engine casing, it was no longer under warranty. Thus, Honda's rejection to cover the problem, even though I did take it to the nearest mechanic for advice. 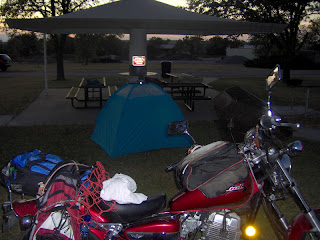 I immediately doused my chain & was gone. At my first stop I found dirty oil on the top of the crank case and on a large portion of the underneath of the engine.

I had coffee and a few smokes, let the engine cool off and changed the oil. I wiped down the engine, noticing where the oil had collected.

I was careful to not push the motor, rarely going over 55 MPH. Making no unnecessary stops, every 30 miles or so I would stop and investigate the motor.

While in Belleville, Kansas I ask a Harley rider if he knew of a shop. He said, "follow me."

I followed to a garage bike shop. NCK Motorcycle & ATV Repairs. He raised up the bike and inspected it. Nothing.

We left it there for nearly 45 minutes. Still nothing.

Analysis? I normally use a chain lube that leaves a white film or residue. This type is different. It lubricates differently. So; problem one - I put on far too much.

Problem two - The wind was blowing quite a bit when I put the lube on, and some of it blew onto the top of the crankcase.

The chain looked wet, some of it, the extra lube, was slung around the drive gear running under the engine.

That was SO freeing! I pushed the engine as much as possible for the next 30 miles, thinking that if the engine was going to do something bad, I would rather it happen near a known mechanic.

75 - 80 MPH up and down hills - No Problem!
While sleeping outside last night, I had an odd dream of unknown rabid dogs and kittens in my house in Iowa. (in 1995 I owned a beautiful old house in Cresco, Iowa) Woke at about 5:30 and promptly built a fire! Warmth!!!

While riding today, for some reason I wanted human contact. There was some unknown desire to find a bar, just have a beer or two and talk with a woman or two. Maybe wake with a warm body next to me. Alas, no bars nearby. Don't need it anyway.

(Just FYI, I AM single, so there were no thoughts of infidelity. I enjoy being alone and eschew going to bars and other social gatherings. These strange thoughts were just out of place. There are some other notes in my log that are purposely omitted here. Maybe some day I will post those, but for now they shall remain in my notebook. Needless to say, I was quite happy to wake up alone the next morning.)
Posted by RazorsEdge2112 at 3:42 PM