Day 6 was little more than wonderful relaxation with family. Al (my Mom's husband) and myself went to visit my sister in Fruitland, Iowa. After that we made our way back to New Boston, IL where other family members were gathering for a night of card playing, coffee drinking and general good times.

Day 7 was early again. After seeing my Mom off to work, Al and I tightened the chain on my bike and waited for the Illinois fog to lift. At about 9:30 AM, kick stand was up, and I was off. 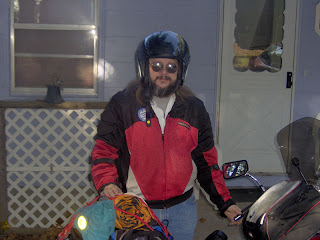 Not sure why I couldn't make it.

Well, got lost in Indianapolis; took I74 out of town but after 20 minutes discovered I was heading toward Cincinnati, not Dayton. So, I had to backtrack to get back on I70.

Found a hotel that advertised $29.95 per night but there was an 'event' so it was $45. The hotel ckeck-in person suggested I continue down I70 to find someplace cheaper - no luck. I did find a hotel that was $45 per night. Had no choice. I was spent.

Last night I had an odd dream, more animals but they were friendly and nice. Normally dreams are all monochrome but one animal, a bird about the size of an Amazon was brilliant red with a few blue feathers. He played rough with me. He would use his beak and play-bite my fingers. It was fun and warm, care free and fun and enjoyable.

"The stopped clock is correct twice a day, but a clock not properly set is never right."

There were several things I wanted to do today but didn't.

I wanted to stop by the ballpark but couldn't. (This is a long story of a young boy, his grandfather and a simple request that through a country ballpark changed a community. Perhaps I will write of this later.)

I wanted to stop by the farm (where I grew up) but did not.

I wanted a photo by the river (Mississippi) but did not.

I wanted to ride through Eliza (Eliza, Illinois was the closest town to the farm) but did not. 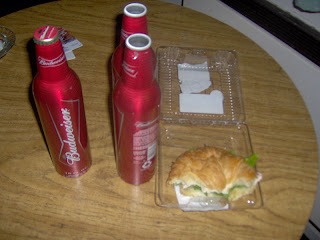 Dinner in Indiana
This was a hard day emotionally as well. Reading my notebook entry pulls forth memories of a rather depressing ride.
Posted by RazorsEdge2112 at 7:46 PM

Ha- your crazy dream had me laughing out loud, made me think of mine a few post ago http://bigalscompound.blogspot.com/2008/11/dreams-what.html I’ve been keeping up with your journey, keep up the good work.
Big Al

I don't normally remember my dreams, but while on this trip the memories were quite vivid.

You post there had me smiling. I used to have dreams of tornadoes and horrid weather while I would be calmly doing everyday things.

T-REXes, eh? Ever think of drilling for oil in your back yard? :-)