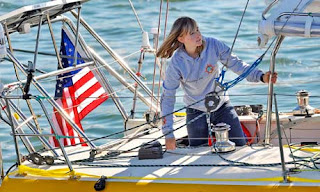 If you have not already read the news about Abby Sunderland, here is a brief bit from The Guardian Weekly (click here to read the entire article).

"Rescuers launched a desperate search tonight for a 16-year-old Californian girl attempting to sail round the world single-handed, after she set off distress beacons in stormy conditions in a remote part of the Indian Ocean.

Abby Sunderland's parents lost satellite phone contact with her today after she had told them she was repeatedly knocked down in 60 knot-winds and 50 foot seas, about 2,000 miles east of Madagascar. An hour later the US coast guard notified them that two emergency satellite beacons on her 40ft yacht, Wild Eyes, had been activated."

I hope she is rescued and at worst, has a minor broken bone and minor case of hypothermia. It is my opinion that she shows a great deal of determination, personal ambition and Joie de vivre; all key properties of an adventurer.

The comments posted by readers of articles about this unfortunate situation range from supportive to uninformed to imbecilic. Unfortunately, the majority of comments fall into the later portion of the spectrum.

Since this is my little stage on the interwebs, I am going to take my little, rarely used soap box, and make a few comments about the comments others have left. Registering on a dozen websites to make comments just is not that productive.

So, my fair readers, here is what I read:

Seriously, some of these comments are aggravating me near the point of anti-social behavior. Should we keep our children indoors, on the couch playing video games in a nice child-proof sterile home, or out in the world? Adventurers such as Abby push at our preconceived notions of things. In order for the human experience to be expanded, the envelope must be pushed.

Honestly, the comments some people have made are disgusting, inappropriate, ill-conceived, uneducated, illogical and disrespectful. Everyone has a right to their own opinion. Here is mine...

I hope she is rescued and tries it again, several times as a matter of fact. People such as her do not typically come about (as proven by the majority of comments I read.) She is an adventurer and it seems to me her parents did what they could to prepare her for this journey; and for that they should be applauded.

It seems to me the majority of the public commenting on this story would rather live meek, safe lives while judging people and their actions behind the pseudo-anonymity provided by the internet.

In total agreement with you. We've raised a society of sheltered pampered wimps. Anyone actually experiencing life is called reckless.

cheering at the soapbox rant. and thrilled to hear/see abby is ok. and btw, i heard her older brother did something similar (from a news report, accuracy of the info not sure), sounds like she comes from a open/supportive/life loving family to me!

i hope she tries again! and im betting she does :)