What Will the Neighbors Think? 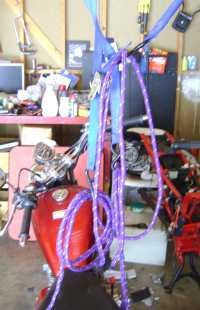 And so, there was wrenching to do.

A friend of mine will be borrowing my Honda Rebel until her bike is fixed. It would not be prudent handing over the key before being certain the bike is in fine working order.

Over the past two months or so I have been wrenching on her here and there. The crankshaft oil seal needed to be reseated. Engine, fuel tank and carbs cleaned out. Spark plugs changed. That sort of thing.

Well, the rear brakes needed to be checked. With only about 6,000 miles on the front brakes, they are fine. However, those rear brakes felt soft and somewhat ineffective. So, my task for last night was to remove the rear wheel and check the brakes. For those of you who are unfamiliar with the Rebel, the rear wheel has drum style breaks, necessitating the removal of the wheel just to check the darned things.

Alas, I do not have a bike jack or stand. A buddy of mine who lives in the same apartment complex does have a bike stand/jack but it is far too wide. Being designed more for large cruisers and dirt bikes, making it fit the Rebel would have been time consuming and tricky.

So, I MacGyver'ed it. With three tie-down straps anchored to the rafters, and some spare rope, there came to be a bike winch of sorts. I would lift the bike up a little at a time while my daughter tightened each tie-down strap. Suspended, the bike was honestly rather stable and secure. Not that I would recommend this method for larger bikes but it worked well with my little 350 pound bike.

Should probably remove the tie-downs and straps before the neighbors see them. Wouldn't want them to think anything funny is going on in there. :-)
Posted by RazorsEdge2112 at 11:12 AM

My Dad told me a story not long ago about owning a Harley in 1950s. They hung it from the rafters with rope to change tires.

You are following a long history of motorcycle maint. history!

It's good to know I am following in some good footsteps. I actually left them up in the rafters after I read your response. Need to do some front wheel work on my project bike and this may just do the trick.