"Failure is nature's plan to prepare you for great responsibilities." -Napoleon Hill
"It is an ill plan that cannot be changed." -Latin proverb. 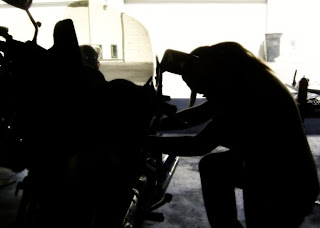 Those two quotes seem quite apropos at the moment. There is no anger nor even a hint of irritation; just a tired, hot confounding pressure in the back of my head, radiating out to my knees and fingers.

For the last three days I have pushed against the oppressive Las Vegas summer heat and aching pressure in my fingers and knees in an effort to clean and check the carburetors on my VX800. They were successfully removed, cleaned and reattached, all without blood loss or single broken part.

At about 7PM yesterday with the thermometer displaying 105, I mounted the tank, turned on the petcock, opened the choke, turned on the key and hit the starter. She cranked and cranked and barely caught once and then backfired. And that was the end of my work for the day. The battery was dead from excessive cranking and there was a puddle of fuel on the ground below the front carburetor.

Apparently I had maladjusted the rear carb so that the needle valve would not allow sufficient fuel into the bowl, and I had not cleaned the front carb enough as it was still overflowing. The course of action was obvious. The air boxes and carburetors had to come off again. The carbs had to be opened up and cleaned and inspected and readjusted again.

And my 40-something body is telling me, 'enough pushing for now.' All spare time for the past four days, excepting the times where temperatures were over 115, has been spent in the garage. My (according to my doctor) pre-arthritic fingers and knee are telling me to take a day or two off.

Maybe it is time to have someone else work on a thing or two. Would it soil my desire to rebuild this bike if I paid someone to take care of the carburetors for me?

Minimally, she does have new fuel lines, a few new vacuum lines and I know how to get in deep if necessary.
Posted by RazorsEdge2112 at 3:58 PM

If you've been checking my blog you know my mechanical woes of late. Sending good mechanic vibes your way.