Busy Sunday and a Few Topics

Sunday evening and so many things to write about. I think I shall start with the state where I was born.

Stop me if you have head this one before...

Do you know why all of the cornstalks in states around Iowa point away from the state? Because it BLOWS!

Ok, this is just a joke. Seriously though, the state took a great leap into progressive politics and culture recently by legalizing civil unions. (Read here on USA Today.) Good for them. Yes, I am about as straight as a fellow can be, but why should people be denied something that straight married people enjoy simply because they were built a little differently? Finally, homosexual unions will be recognized.

Iowa, you don't "BLOW" that much now. Bravo! 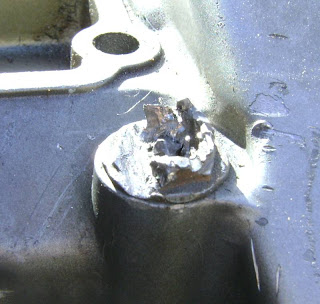 Now, a little study in diagonal thinking. The picture on the right shows a very 'evil' head bolt, clinging tightly to the engine of my little Suzuki VX800. I honestly believe that nearly every typical bolt removal technique known to mankind was attempted on this bolt and failed.

If you look at the very center, you will see the broken remains of a bolt removal tool.

Well, Saturday was a motorcycle work day. I washed down and detailed my Rebel and did some basic maintenance on the Sporty. I then decide to ride over to AutoZone, thinking they might possibly have something to help remove the 'evil' bolt.

My local AutoZone is no Mecca of tools, but the people who work there are helpful and intelligent. Unfortunately, this situation stumped them. No solution other than using a Dremel or grinder or something of that nature; all of which have been attempted. The little piece of bolt remover is seriously hard. It has eaten one hack-saw blade and six or so grinding wheels, includinga small diamond bit.

So, I browse the store and just wander, not really think of anything. For some reason I pick a new set of metal files and a punch from the shelf. There was no thought of how these tools would be used, just a purchase.

Still not sure what I am going to do, I just start filing away at the top of the bolt. The bolt remover piece will not allow the file to take the entire bolt head off. Damn. The punch is then used to start hammering the bolt remover piece. For weeks it has been loose in there, but is just will not come out. 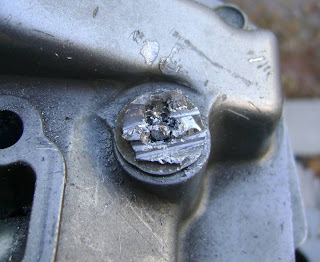 Then a thought came to me... Why not hit the bolt on one of the filed off sides so that there is some pressure to rotate out (Right side of the bolt head in this picture). Well, it's hard to explain in words.

After the second WHACK, it turned. Not much, but it did! A few more whacks and it was out.

Why did I purchase a new file set and punch; a valid solution to my problem, without consciously knowing how the tools would solve the issue? 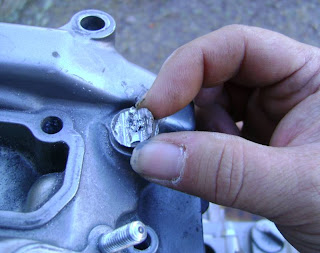 Maybe the solution to some of life's more difficult problems doesn't require a lot of thought. Maybe it just requires a mindless stroll through an auto parts store.
Posted by RazorsEdge2112 at 8:08 PM