Just about the same time I was discovering girls, my Dad was instructing me in something far less complex; firearms.

Pictured here is a Winchester Model 67, single shot, bolt action rifle chambered for .22 short, long and long rifle. My dad purchased his for a mere six dollars in the late 1930's through a Sears and Roebuck catalog.

This was the gun I first learned to shoot, and admittedly I was pretty good. Taking a squirrel at 100 yards was not unheard of. Considering all it had were the old iron sights, that was pretty good.

Even today I have an old 67 being restored.

Search as I might, a certain posting has been lost. I would have bet anyone there was a posting about this next event in my life. Apparently not.

If you look back to this post, there is a picture of my grade school. To the lower left is a ball diamond, complete with lights, bleachers, refreshment stand and even an outhouse. In fourth grade it was little more than a backstop overgrown with vines and brush. 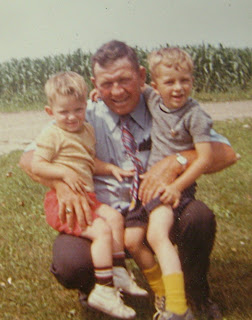 Toward the end of my fourth or fifth grade there was a favor burning in my soul. A desire beyond anything else. OK, it was just a thought, but all the same, I wanted to play baseball. It is a relatively quiet sport; nothing like the basketball I failed at.

My Grandfather, pictured here with my brother and myself on his farm, was the prime target. He loved baseball and was a fan of the Chicago Cubs. So, long story short, in 1977 or so, I asked him to start a baseball team.

Within a year we were playing softball on a manicured field, lights were installed, the backstop rebuilt and bleachers cobbled together. We played softball. Starting as a short stop, the catcher didn't like the position so I took it. We had one pitcher, and one catcher. That made for some very long summer games.

In another year there were outhouses and a refreshment stand on the site. We were not the only team playing on the diamond. Now there were several adult softball teams sharing our field.

I last saw the field in 2005 and nearly 30 years after a simple request of a fifth grader to his grandfather, it was still in use.

During the second season I arrived home after hunting or walking the woods or some other activity, to find my Mom on the phone sobbing and speaking to someone in barely understandable words. There was little I could do to calm her, she just rubbed my head.

Something bad had happened, someone or something had died; it was all quite unclear. After she hung up the phone and composed herself, she asked to speak to me. The numbness started but from where, I was uncertain. "Kenny, Mike is gone," she said, tears still welling in her eyes. 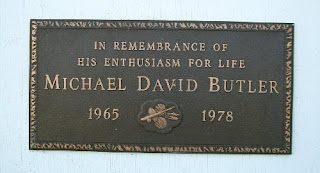 "There was an accident, Kenny, in front of your Uncle Milo's house. Mike was riding his dirt bike and a truck hit him."

Mike Butler was our pitcher and a close grade school friend of mine. This plaque is on the refreshment stand at that ballpark.
Posted by RazorsEdge2112 at 9:25 PM

I'm sorry to learn of your friend so long ago. Must have been a great friend.
The part about the Baseball field is awesome. This would make a great Ron Howard picture.

Yes, Mike was a pretty cool fellow. It was tough playing ball after that. Recently his sister contacted me on FaceBook and thanked me for posting a picture of that plaque on my profile.

I suppose that would make an interesting movie, maybe something like "Field of Dreams?" :-)