Ride out to Hoover Dam 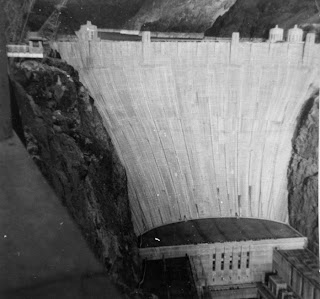 There was simply no resisting.

My last attempt to ride Hoover Dam resulted in Bikus-Interruptus due to Christmas Day traffic. With the new camera and temps in the low 60F range, there was only one thing to do. Ride and video it.

While there was more traffic than I like, it was a nice ride down the canyon, across the dam and into Arizona. The cause of the lighting issue with the camera became apparent this afternoon while looking at, and editing the video. With the camera mounted 90 degrees, it's aspect ratio is taller than wide. Thus, it is receiving more light from the sky than if it were mounted horizontally. The electronic shutter closes just a bit and makes the landscape look dark in many places.

The program I use to edit and render, Microsoft Movie Maker, adds to the problem and darkens it more, with each reduction in quality.

So, next week I will order the proper mounts from GoPro to mount it horizontally to my helmet.

The windscreen mount experiment failed. The video from the camera while attached there was so shaky as to be pretty much worthless. However, it was horizontally mounted and the lighting was fine.


Oh, about 1 minute in, and at the end, note the nifty new bridge being built over the dam! When it is complete and traffic is flowing, the dam will likely be cut off from all traffic except tourists.

P.S. The song is Blue Sky Blond by Thieves and Villains.
Posted by RazorsEdge2112 at 5:43 PM

Great Hoover Dam ride, I've been there a few times myself...both times in a corvett that I rented from a local car rental. next time I'll rent a bike.
Big Al

I have been to the dam once. I have yet to ride to it. That's next. Great video!

Very good post and including the video just makes the whole thing come to life. It might help to make your video a little larger on your blog page - I have just learnt how to do this from Bobscoot and it helps a lot. I use YouTube and it looks as if you upload your video directly in Blogger, so there is no point in me passing on how to do it in YouTube. Looking forward to seeing the results after you have got your new mounts.

Anyidea when the new bridge will be finished? I want to ride over it and on the old dam road.

My ears were burning when I heard the word GoPro so I stopped by. You must be trying very hard not to move your head very much with your helmet mount. Your video is very smooth.

Al,next time you are in town, give me a call & we can ride down there. Riding, Hoover Dam when there is little traffic, is so much better than driving.

Hi Gary & thanks for the hint about using YouTube and posting the video from there to my blog. I will do that next time. According to what I have read, the bridge should be complete by the end of this summer. I honestly do not know; there seems to be a lot to finish.

Thanks Bob. Well, I am paying attention more to my head movements, but not going to great strains to ensure a smooth video. Honestly I thought it would be a lot more shaky.