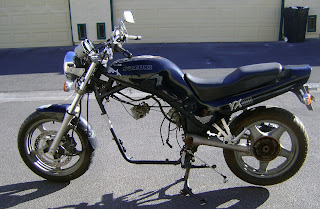 Honestly, I am too tired and not feeling well enough for a full update on my project bike. But, for those who appreciate V-Twin Suzuki bikes (Stacy) and other visually stimulated folks, here she is; a black 1991 Suzuki VX800.

OK, honestly, she doesn't look like much in this condition. The engine is in the garage, as is the final drive mechanism. Hence, the appearance of crap. BUT, I have all of her.

Current appearance not withstanding, this bike is a rare bird. She was only sold in the states between 1990 and 1993. At 805cc, this bike may be the largest displacement, most powerful motorcycle in the Standard class. (I may be wrong, though. Anyone?)

Oh, and I have heard of people who modified this bike into full blown street fighters, cafe racers, sport tourers and even one fellow who modified his into a dual sport adventure bike.
Posted by RazorsEdge2112 at 10:13 PM

Hey, it looks better than our project!

That 800 is the biggest "true standard" that I know of, but I'm certainly not an expert. I know Nighthawks went all the way up to 750, but not sure about any Kawasakis or Yamahas.

Most of the major manufacturers make liter-sized "naked" bikes, but I don't consider those standards -- they all show their sportbike roots.

Some would classify the Harley Davidson Sportster a "standard." After riding a 1200cc Sporty for more than 10,000 moles, I would classify it more a cruiser. Just my opinion. :-D

Apparently the Kawasaki Z 1000 and BMW R1150R are classified as "standards," but I just don't see it. Like you wrote, they all show their sport bike roots.

I would never classify a sportster as a standard.

Looks like a nice project you've got going there. Can't wait to see it finished. We're looking for a project now. Probably an Indian. :)