Not a happy camper - bike damage. 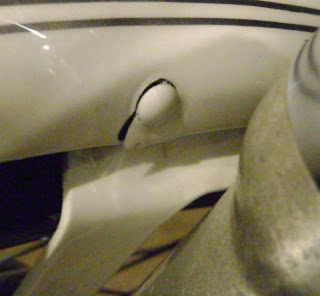 No, I didn't go down, thank goodness. This happened while she was parked and I was in a meeting. Came out, hugged everyone good-bye, went over to my bike, started her, and as soon as I sat on the saddle, the headlight shown down on the damage.

It is indeed possible the person who did this, didn't even know. But, if they did, minimally an apology would have been nice. Recognition that they made a mistake. 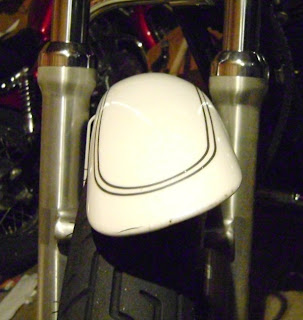 It is likely there would have been no police called, no insurance adjuster called. Just recognition.

People suck. But at least it's not badly damaged. And you're ok.

Gosh Ken...sorry your baby got damaged! I agree with Ann...people SUck!

Just try and have something nice and some jerkoff can't even own up to damaging it. Not even an anonymous note at least. I wonder if they did it on purpose as I don't see how to hit it like that and not damage anything else.

i agree with the possibility that maybe the driver didnt know. looking at how the fender is tipped, seems like she was hit from the side and above, maybe a large/high truck backed into it. and since athena didnt go over it may have been only a slight tap. still obviously enough of a tap to do damage...

Sorry boo, but I just ain't buyin' the "didn't know" story....unless the asshole that did it was under some kinda drug and/or alcoholic influence 'n was blind in one eye, deaf in both ears, numb in the body AND in mind AND was drivin' some sorta huge-ass tank in the midst of a parkin' lot which was most likely full o' onlookers who were in the same sad damn stupor as the other driver was. Maybe THEN I'll believe it....but ONLY maybe.