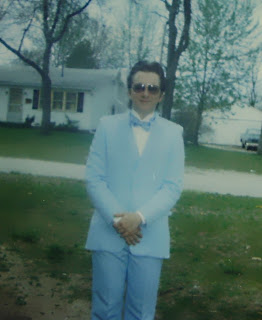 OK, going to make this a short one. It was my Junior Prom. (Actually, I believe this was a picture before my Senior Prom... ah well) My date and I took another couple with us to the prom. Being the epitome of the phrase "White men can't dance," For the most part I sat on the sidelines.

When it was done, we changed clothes, got in my Galaxie and started on the hour ride home. About seven miles or so north of New Boston, a nasty noise starts coming from under the car. My first thought was that one of the glass-packs had fallen. Pulling over to the side of the rural blacktop, getting out and inspecting the situation with a flashlight, there was no mistake. It wasn't the muffler or even an exhaust pipe. It was the frame of the car!

Yes, the frame of the car had rusted through, failed and was gouging into the asphalt!

So, at 3 AM, my date, the two drunk people I was driving and myself headed toward New Boston. After about a mile a car pulls up behind us and flips on the lights. A cop.

Number one, he understood the situation as he had seen the car along the side of the road. Number two, my date's dad (may he rest in peace) was a cop and my date knew this officer. So, regardless of the fact we were out far later than curfew, he taxied the two drunk kids home and my date and I to her house.

The next day my car was drug back to the farm and sold about a year later for $50. 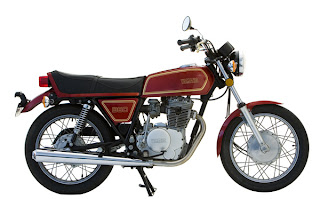 Then came my first motorcycle. It was a Yama-suki I believe... Yamaha chassis and Suzuki engine. Oh did we have fun. Regardless of the fact she was more of a street bike, we scored many miles of muddy farm roads.

She was similar to this 1978 Yamaha 360, but I KNOW the engine was near 500cc and the mufflers were punched through.

One time my brother was the passenger as we went into New Boston to deliver newspapers. She ran out of gas about three miles from the farm. I was a noob rider and had been running on reserve instead of main. Ah well.

We walked back to the farm to retrieve my POS Vega Hatchback.

Can't believe my dad spent 400, 1982 dollars for this piece of crap. So I drive to where the bike was, we picked the motorcycle up and put it into the hatchback!!! 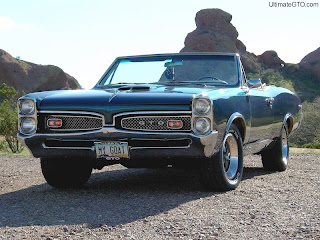 The paint was rough and top ripped up, but that was it.

razor, ummm, my friend, you know that pic is of a pinto and not a vega, right? :)

Ms M beat me to it. That pix is of a PINTO. My friend used to have a Vega but it kept eating oil because of the design problem with Aluminum heads and steel sleeves.

Nice GTO, they didn't make that many convertibles so that car would be very desirable now.

I am sort of like you, but for different reasons and I'm making up for it now by trying to meet everyone I can.

oops... Well, apparently two of us were wrong. The website I snagged that picture from said it was a Vega, and darn it, that looked close to the one I had. Ah well. Thanks you two for the correction.

Yes, BobSkoot, my Vega drank oil terribly. Didn't know that was the issue. I can only hope the aluminum heads were recycled into beer cans or something.